Our website uses cookies to manage some features and to show you news and announces in selected language. By clicking on OK button, you accept the use of cookies.

Sorry, translation of this article is not available at the moment. 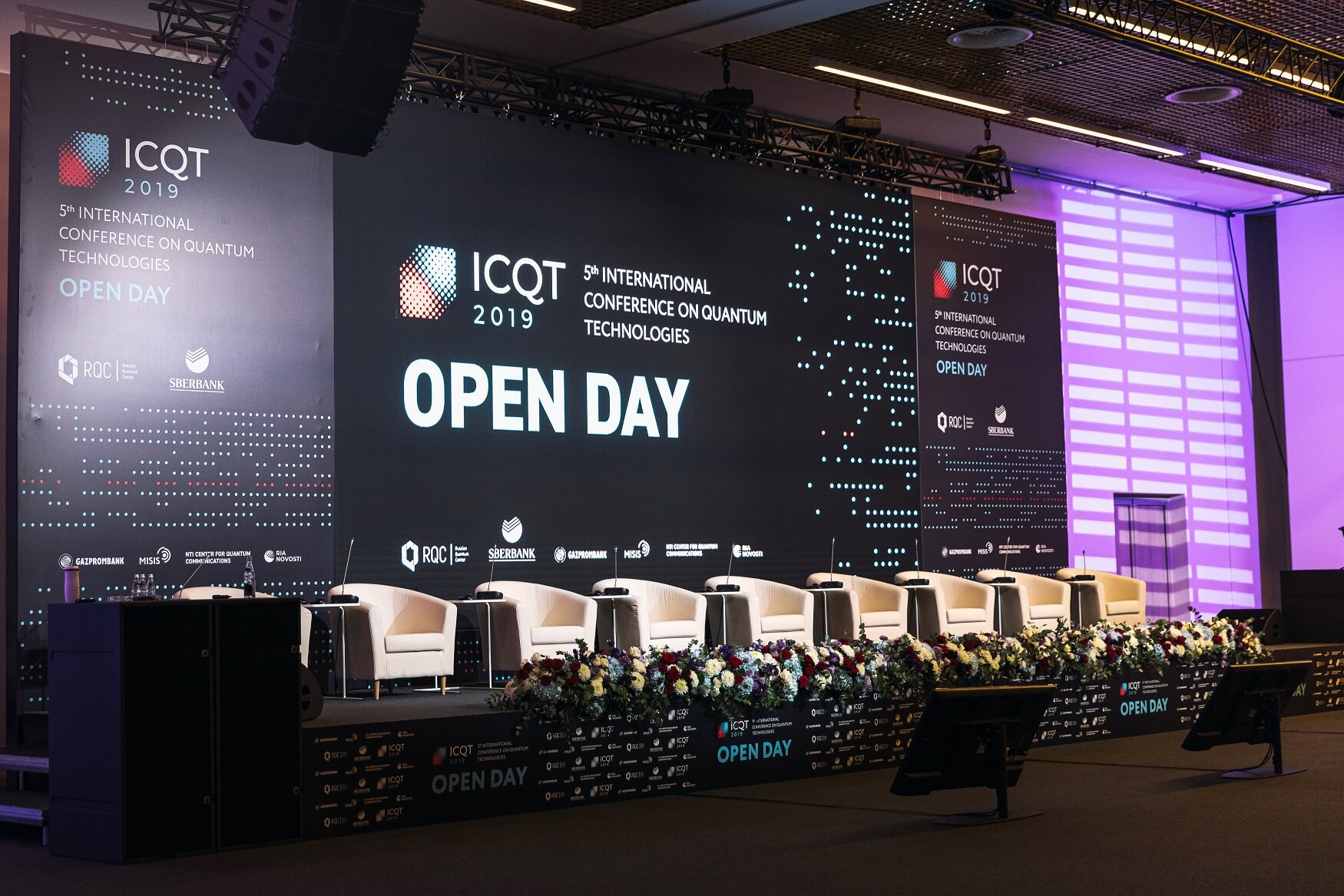 The Fifth International Conference on Quantum Technologies ICQT-2019 took place in Moscow on 15–19th of July 2019. This time the level of its representativity outperforms the previous year results. From among scientific reports the one of main topics was about quantum technologies coming to the commercial market.

The international conferences ICQT are managed by the Russian Quantum Center (RQC) every other year starting from the RQC founding in 2011. Every conference is a kind of international quantum technology achievements review. It thanks to the special format of the conference. There’s no division by sections and all viva-voce reports are plenary. The leading scientists and experts are invited to report and present the latest advances in their responsible fields. Also, ICQT is visited by the representatives of the government and business, who get understanding in the most potential scientific and technological trends by cooperation with scientists, and as the results they give feedback to scientists and engineers regarding business expectations.

This year the Conference is participated in record number — over 300 people from 20 countries. During 38 scientific reports, presented in the conference hall of Radisson Hotel, there wasn’t enough room for all-comers. In comparison with ICQT-2017 it’s visited more than twice as many guests. During field-specific presentations the visitors were gathering in groups on the sidelines of the Conference to discuss their investigations. And for many minds it was equal the plenary reports in importance. At the poster session, divided into 2 days of the Conference, over 180 works have been presented, and every speaker had possibility to introduce the achievements by his investigations. The culmination of the Conference was the Open Day gathered more 1 000 guests. The visitors were offered five public talks with the quantum technology global leaders and the panel discussion with scientists and business leaders who joined them.

One the main effect of the Conference 2019 is that the number of quantum technologies have come to the launch stage of commercialization. It’s reflected in the two-year report of the RQC presented at the conference opening. In addition to the records of 14 RQC investigating groups activities the report includes the information regarding difference market launch stages of products elaborated by 7 affiliate innovative companies of the RQC. Products were displayed in the hotel lobby at the open day of ICQT-2019, for instance, the operational system of quantum communication, designed by QRate company. At the panel discussion ICQT-2019 at the end of the Open Day Grant Waterfall, Global cybersecurity and private leader, PwC, that participated in the fully secured videoconference based on QRate products, called the RQC as the important partner and reported that due to PwC strategy the quantum computing was listed amount eight disruptive innovations, which make a technological mega-trend in macroeconomics and geostrategy.

The next important result of ICQT-2019: the business sufficiently changed its attitude to quantum computing project. At previous conferences the quantum computing was mentioned as a project for many years to come. Currently it’s considered as the up-to-date direction to drive. In this case the demonstrative report was presented by Dr. Thierry Botter, a strategic advisor in European Commission on Quantum Technologies, Head of Airbus Blue Sky (Airbus), the company, who opened a tender for effective quantum calculating applications in range of flight mode optimization up to aircraft lading.

Hartmut Neven, Engineering Director at Google, founder and manager of the Quantum Artificial Intelligence lab, reported about the occurring in the near future superiority of quantum technology — it’s supposed that quantum computers would outperform digital ones in different directions at least. As Mikhail Lukin said, Co-founder of the RQC, Professor of Harvard University, the superiority of quantum technology has been already achieved in some specific tasks, being of exceptional academic interest.

We should take note the report of Paul Bunyk — Principal Processor Architect at D-Wave Systems, the first commercial quantum computer’s designer. He started how he was impressed with Japanese Fifth Generation Computer Project in 1980s. The computers were supposed to equip with superconductors and digital intelligence to scope a road traffic control. At that time this Japanese project’s been failed. But now the quantum processor D-Wave is implemented on base of superconductors and the strategic partner of D-Wave is Volkswagen, who’s going to apply the quantum computer for road traffic optimization by intelligence, for instance. D-Wave’ portfolio includes more than 150 operational applications of quantum computers and agreements valuated in 75 million dollars US.

The next of the principal trends that’s occurred distinctly at the Conference is connecting quantum technology with digital intelligence. The several reports were devoted to this topic. The science team of the RQC directed by Alexander Lvovsky, was the one who announced about changing the sphere of interests from Quantum Optics to Quantum Machine Learning where the most fascinating results are expected. The results concern both quantum calculating application for optimizing the neural networks and digital intelligence applying in quantum-technological experiments.

In total, as observed at the Conference, the quantum technology is growing up from the promising direction to the actual business sphere all over the world, that’s taken an interest by such blue chip companies as Google, Airbus and PwC, and their representatives not only visited ICQT-2019, but also gave the public lectures at the Open day of the Conference.